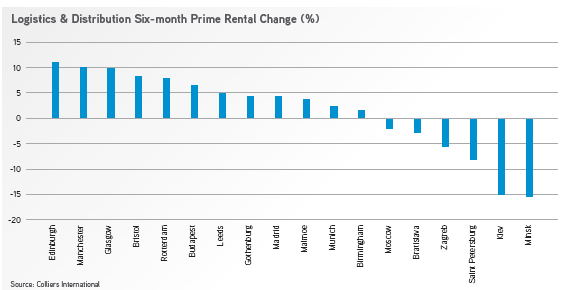 Prime industrial rents in Edinburgh grew by +11.1 percent in H1 2015, the largest increase in Europe, according to the latest Industrial and Logistics Snapshot from Colliers International.

The Western Europe markets of Glasgow and Manchester (both +10 percent), Bristol (+8.3 percent) and Rotterdam (+7.9 percent) also performed positively. Conversely, Minsk in Belarus reported the biggest decline in prime rents in Europe in the first half of the year dropping -15.5 percent in H1 2015; this was closely followed by Kiev in the Ukraine with a decline of -14.9 percent and St. Petersburg in Russia with a decline of -8.3 percent.

Tim Davies, Head of EMEA Industrial and Logistics, at Colliers International, said: “The industrial and logistics market in Europe continues to be characterised by constrained availability of high quality warehouse and distribution space. Despite this, prime logistics rents remained stable in the vast majority of markets in the first half of 2015. The supply of quality product remains limited in the UK, and this fact combined with increased demand, has led to a rise in rents across all locations for prime stock in H1 2015.”

“The UK continues to lead the way in terms of increased activity, but the rest of Europe is beginning to follow suit,” Davies continued. “All UK markets report increasing rental levels which reflects the fact that levels of supply are being eroded and occupational demand is increasing. Inevitably with funding more readily available speculative development will occur throughout the regions’ strongest locations.”

Tim Davies concluded: “Investors’ appetite and record-low interest rates continued to drive compression of prime logistics yields. In the first six months of 2015 we saw prime yields tightening in more than half of the markets we monitored. In the next 12 months, further tightening of yields is expected across the Netherlands and UK, as well as in Dublin, Central Poland, Warsaw and Bucharest.”