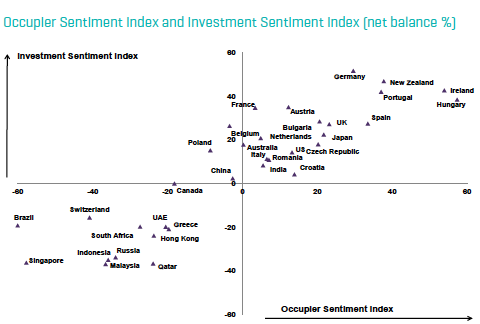 Investor appetite continues to grow in most European commercial property markets with Germany leading the way for a second consecutive quarter. However, upcoming political events in the UK and Spain are starting to have an impact in these markets, according to the latest RICS Global Commercial Property Monitor.

In Europe, German cities continue to feature strongly as attractive centres for funds despite the strong gains recorded in recent years which have pushed up valuations; as a result, around three quarters of respondents in Munich and Berlin (and a little less in Frankfurt) now view their local market as expensive to some extent. The latest data is consistent with increasing interest in some secondary locations as robust confidence in rental growth prospects help support more positive views on pricing.

Commercial property continues to perform well in Spain and the UK, with both capital values and rents expected to rise further over the next year, albeit it less so than previously. However, the survey suggests near term political uncertainty is now beginning to weigh on investment decisions, with an inconclusive Spanish general election and the upcoming EU referendum in the UK mentioned as factors hampering activity somewhat.

In Ireland, Portugal and Hungary robust investment market trends are coupled with positive occupier demand, as job creation is driving demand for leasable space, causing availability to fall and pushing rents higher. As a result, respondents anticipate firm rental increases in the coming 12 months in Budapest, Dublin and Lisbon. The appeal of these cities is supported by the perception that they continue to offer relatively attractive valuations which is also reflected in the assessment that the respective markets are still some way between the early and mid-upturn phase of the real estate cycles.

In the Netherlands, Italy and France, investor demand (in particular from foreign buyers) continues to rise across all sectors, especially in the office and retail sectors.

The RICS index tracking changes in occupier demand shows a belated improvement in the picture in France which mirrors a better tone to the numbers for Paris. This is reflected in the first positive reading in the headline Occupier Sentiment Index for the city since 2011. However, for the time being there is a clear divide between prime and secondary space both in terms of rental and capital value projections.

In Italy, twelve month rent expectations are positive in the office and retail categories, but remain marginally negative for the industrial sector.

In Central & Eastern Europe, sentiment remains generally positive but in Poland although investors demand rose this quarter, expectations for capital growth turn negative for the year ahead following the softer trend in the occupier market.

Simon Rubinsohn, RICS Chief Economist commented:“The feedback we are receiving across most of Europe regarding the prospects for the real estate sector remains positive despite concerns in some markets about valuations. A key support remains the drift of monetary policy with negative interest rates enhancing even further the attractions of real assets. Although some of the more investible cities in Europe have already enjoyed very good runs which is reflected in their pricing, they remain sought after by both domestic and foreign purchasers. Meanwhile, some second tier cities are now being viewed more positively on the back of better macro data and relatively attractive valuations.

That said, it is important to be mindful of the risks to the sector in general which could result from either deterioration in macro-economic fundamentals or from a fracturing in the political environment. Either of these developments is likely to result in a more cautious stance from investors.”

The Q1 2016 RICS Global Commercial Property Monitor shows positive sentiment across developed economies, with occupier and investment demand for commercial real estate increasing, in particular in Europe. In emerging markets, commodity exporters continue to struggle, even as market conditions in China appear to be stabilising after the measures taken by the Chinese government to support the economy in the wake of growing concerns over the risk of a severe slowdown. The outlook across many Asian markets remains cautious.

Looking at how respondents perceive commercial real estate prices, In Qatar, 90 percent of respondents currently perceive commercial real estate to be overpriced to some extent, as a result of the challenging macro environment. Alongside this, a majority of respondents in Switzerland (87 percent), Germany (73 percent) and Japan (70 percent) were of the opinion that commercial property prices are above fair value. Property prices in Athens, Budapest and Madrid continue to be the cheapest compared to fair value.