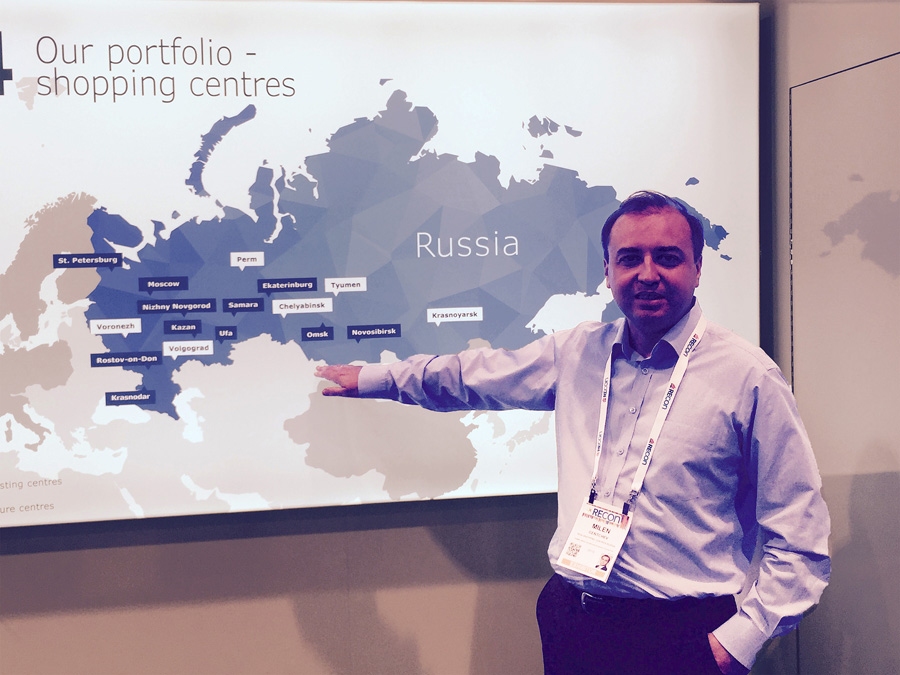 Russia’s economy may be slumping, but there appears to be a bright spot in the retail sector. Russia is Europe’s largest retail market by sales, making it an essential destination for international retailers seeking growth in Europe. Russia’s 146 million consumer market is an attractive prospect to international retailers. Russian consumers have a huge appetite for western brands — they represent a fast growing middle class, and spend up to 70 percent of their pre-tax income on retail, more than any other European nation.

The country’s largest shopping centre operator, IKEA Centres Russia, is investing at least $2.1 billion to upgrade and expand its current portfolio of 14 locations across Russia. The Scandinavian group has been successfully working in the Russian market for over 16 years. The MEGA centers house around 200 stores and welcome around 275 million visitors annually, according to the company.

IKEA Centres Russia, part of the global IKEA Centres Group, attended ICSC ReCon Las Vegas to highlight the progress and specific details behind its $2.1 billion investment programme. The company is reinvesting into its portfolio of 14 MEGA shopping centres across Russia, strengthening their offer and appeal with significant mall extensions and commercial upgrades. Russia is Europe’s largest retail market – and IKEA Centres Group is a long-term investor in the country.

Russia’s first IKEA was opened in Khimki in 2000. MEGA Khimki soon followed in 2004 and became the largest retail complex in Russia at the time. Despite several new retail centres opening their doors along the Leningradskoe Shosse, MEGA Khimki remains one of the district’s most popular shopping destinations, largely due to its location, well-designed layout and retail mix. New tenants and constant improvements to the centre have significantly increased customer numbers.

IKEA Centers has long-term plans to develop more malls further east in Russia in the next 10 years, but for now the focus is on more modest expansion of its existing premises. The firm plans to first redevelop two malls in Moscow increasing the leasable space for both properties by 15 percent to 20 percent. The new space is targeted at tenants in the fashion, toys, electronics, entertainment and food sectors.

Sweden-based IKEA Centers Group manages over 50 shopping centers in Europe, Russia and China with furniture retailer IKEA as an anchor tenant. In Russia the stores operated by the group are known as MEGA malls. The vacancy rate of the 14 malls currently fluctuates around 1.4 percent.

IKEA Centres Russia develops and manages 14 MEGA branded shopping centres located in the country’s 11 largest cities with populations of over one million people. The number of MEGA visitors during the 2015 financial year increased by 5 million, with tenants’ sales reaching €5.6 billion.

IKEA Centres Russia is also implementing upgrade and extension projects at several of its MEGA shopping centres, and is developing new concepts. The company is also currently redeveloping its food courts and leisure concepts. Its international and transparent approach to the business, and 15 years experience of hosting international leading retailers, have allowed IKEA Centres Russia to offer a familiar western environment through its established chain of MEGA shopping centres. In 2015 alone, some 90 brands signed up to a MEGA centre, including new-to-Russia brands such as DeFacto, Pimpkie, and Popbar. Also, Turkish fashion brand LC Waikiki chose MEGA stores to open five new shops in December 2015.

Elsewhere in the business, IKEA Centres Russia is constantly looking for innovative ideas that can improve customer experience. Further investment has been made into the launch of ‘MEGA ACCELERATOR’ – the first retail start-up business accelerator in Russia. The Accelerator is designed to bring together talented developers, programmers, business experts, retail specialists, designers and marketers with innovative ideas to work on projects enriching retail environment and creating a more enjoyable shopping experience.

Milen Genchev, Deputy General Manager at IKEA Centres Russia and Director of MEGA Accelerator, commented: “We believe that start-up companies are a great source of innovative ideas, and MEGA Accelerator is providing a unique platform for their development. It’s great to see huge interest from young Russian entrepreneurs and start-ups for our project, and we are confident that we will see some interesting MEGA Accelerator projects implemented in our MEGA centres very soon.”