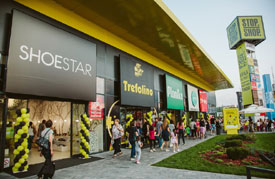 Immofinanz Group, one of the leading real estate developers in Central Eastern Europe (CEE), has celebrated the grand opening of its Stop.Shop. retail park in the Serbian city Valjevo.

Construction of the Stop.Shop. retail park in Valjevo commenced in November 2015 and was an investment worth around €7 million.

The retail park consists 6,105 sqm of retail space and 170 parking spaces. According to Immofinanz Group, the new retail park has a catchment area of roughly 200,000 residents.

The STOP.SHOP concept represents a regional chain of retail parks located on prime locations with catchment areas of up to 150,000 inhabitants. Its rentable areas range between 2,500 and 15,000 sqm, while international brands account for around 80 percent of the tenant mix.

Over the past nine years, Immofinanz Group has developed STOP.SHOP retail parks across Austria, Poland, the Czech Republic, Slovakia, Hungary, Serbia and Slovenia.