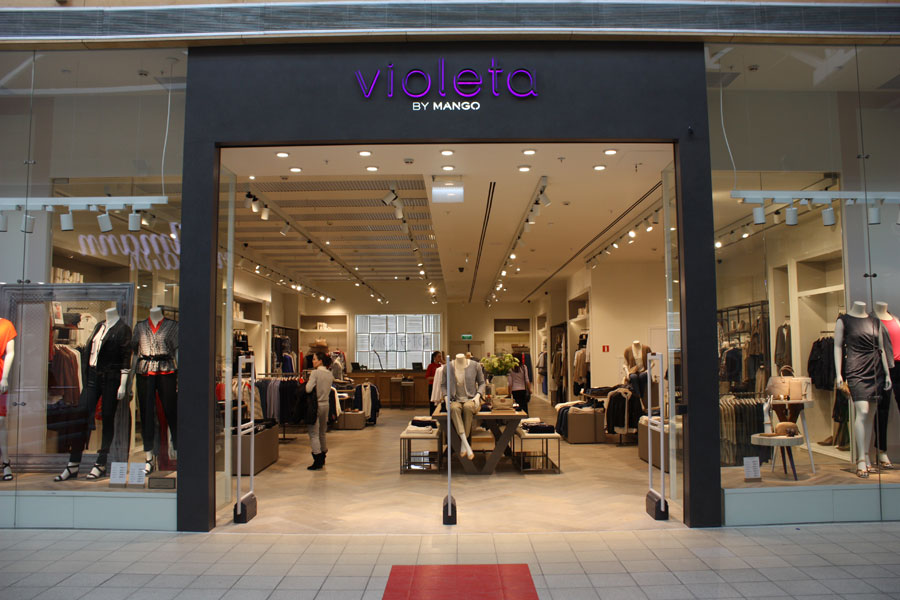 IKEA Shopping Centres Russia has marked a new fashion business success by opening the first Violeta store in Russia. Mango’s new plus-size line has entered the Russian market via a regional city rather than starting out in Moscow or St. Petersburg as most western retailers traditionally do when launching a new brand in Russia.

Violeta by Mango has launched in IKEA Shopping Centres Russia’s MEGA Kazan mall, where it opened its first store today. Kazan is located 450 miles east of Moscow, and has a population of more than 1.1 million people, making it Russia’s sixth largest city. Often referred to as the country’s third capital it is a major industrial and financial centre.

Armin Michaely, IKEA Shopping Centres Russia’s General Director commented: “Violeta’s decision to launch its first store in Kazan shows the high level of confidence its management has in Russia’s regions. We have been partners with Mango for a long time – the brand is represented in majority of our MEGAS across Russia. We are pleased to see that Mango no longer feels the necessity to “test the waters” in Moscow and St Petersburg. Expanding Mango throughout Russia in recent years has given its management confidence, and an understanding that Russia is a dynamic retail market with opportunities across many cities. IKEA Shopping Centres Russia is the longest established shopping centre operator in Russia, and we believe we provide the best experience for our tenants and customers.”

Aniko Kostyal, Expansion Director Russia and CIS, at Mango said: “We are launching the Violeta by Mango brand in Russia at the same time as the worldwide launch in Spain, Germany, Turkey, France and Italy in spring 2014. In Russia we are planning to open 10 Violeta by Mango stores in 2014 in Moscow, St Petersburg and various “millioniki” cities. We have decided to launch the brand in MEGA Kazan because this is where we opened our first Mango MEGASTORE in Russia in the summer of 2013, and it was very well received by customers. We expect the same to happen with Violeta as Kazan is a very fashionable city and we are very happy with our collaboration with IKEA Shopping Centers Russia.”

Russia is now Europe’s largest retail market with an annual retail turnover of more than 400 billion GBP, with many large regional cities contributing to this figure. IKEA Shopping Centres Russia recognised this opportunity and in the last decade has developed its MEGA branded malls in 11 of Russia’s 15 so called “Millionniki” cities with more than 1 million inhabitants.

Other fashion brands already located in Russia’s regional cities include Marks & Spencer, Karen Millen, Zara, American Eagle Outfitters, MAC, Gap, H&M and Topshop. Their presence in these cities can be attributed to the “safe entry platform” provided by IKEA Shopping Centres Russia’s MEGA malls, which ensure a familiar western environment where many of the cultural and legal barriers to entry have already been safely negotiated.

14 MEGA malls attracted 261 million visitors in 2013, with footfall improving by 3 percent and collective sales increasing by 10 percent compared with 2012. Michaely is taking steps to ensure this continues and has just implemented a significant commercial upgrade programme at 12 of the 14 MEGA malls. A food and beverage offering to suit all tastes is being brought to the “heart” of each mall, including both fast food and longer dining concepts. MEGA shopping centres are also being extended, with façades and entrances being upgraded, as well as the communal areas.

MEGA shopping centre tenants that have recently extended their leases, entered Russia for the first time, or expanded into the millionniki cities include: Steve Madden, Jack Wolfskin, Vans, The North Face, Pandora, DKNY, Campo Marzio Design, Desigual and Minelli. In addition, Spanish retail giant Grupo Cortefiel recently demonstrated its confidence in Russia by purchasing its Russian franchise operations comprising 67 stores, many of which are located in MEGA malls.