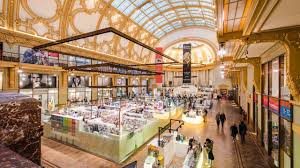 Multi Corporation has signed a lease with H&M brand Weekday for an 850-sqm store in its Stadsfeestzaal shopping centre in Antwerp city centre. Weekday, a modern and trendy fashion and denim brand, is expected to open its doors at the end of October 2017. Multi is the owner, manager and developer of the 21,500-sqm shopping centre.

This will be Weekday’s second store in Antwerp and a perfect addition to the range of fashion brands in Stadsfeestzaal. Weekday will open a two-storey shop and will be the second H&M brand in the shopping centre. COS, another H&M brand, has been a Stadsfeestzaal tenant since its opening in 2007.

Over the last two years, Stadsfeestzaal has welcomed a number of new popular chains, such as Flying Tiger, Action, Kruidvat, Hans Anders and various kiosks, in response to public demand from shoppers on Meir, the shopping street in the city of Antwerp.

Stadsfeestzaal, famous for its golden dome, is located in the historical ‘Antwerp Festival Hall’ building in Antwerp city centre. The centre opened in 2007 after a careful restoration of the listed building. Ideally situated on Antwerp’s main shopping street, Meir, the shopping centre welcomes over six million visitors a year.

Stadsfeestzaal has undergone a metamorphosis over the last two years. The central square has been transformed into a lively plaza and the basement has been reconfigured. It’s retail mix includes fashion stores, daily shops, leisure, as well as food and beverage activities, all accommodated in a unique combination of historical and modern architecture.

Multi was assisted in this transaction by Group Hugo Ceusters-SCMS, which acted as the commercial agent for Stadsfeestzaal.