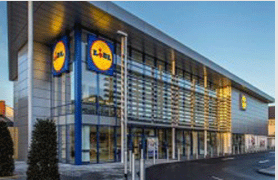 Lidl, discount food retailer owned by the German Schwartz Group, has begun the construction of its new supermarket in Belgrade, located at Zemunska no.4 Street.

The new supermarket will consist of 2,500 sqm and will be designed according to the chain’s latest store concept.

At present, Lidl has several new supermarkets under construction in Belgrade, as well as in other major Serbian cities. As stated by its representatives, the company plans to open its first stores in the local market in 2018.