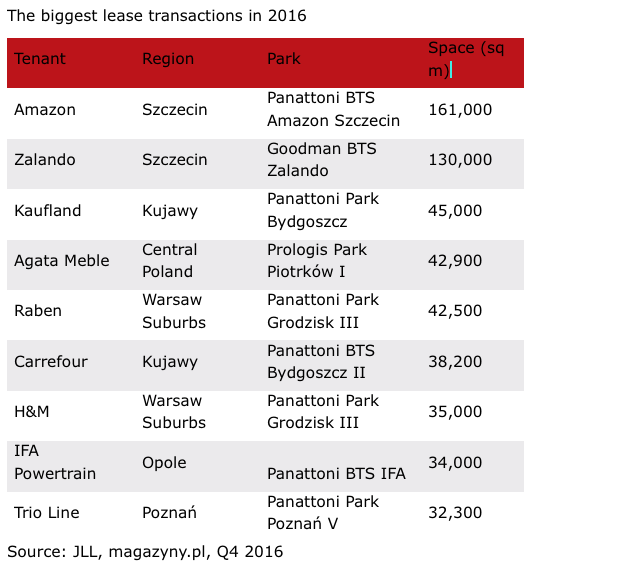 Tomasz Olszewski, Head of Industrial CEE, JLL, said: “In 2016, demand on the industrial market in Poland hit an all-time high. Gross take-up was 3 million sqm out of which net demand amounted to 2.2 million sqm. GDP growth and the gradually increasing importance of Poland as an e-commerce hub for Western Europe were also key factors in stimulating the growth in demand. This, coupled with one of the lowest rental costs in Europe and low interest rates, has enabled Poland to become one of the most sought-after industrial and logistics locations on the continent”.

In 2016, the most sought-after location was Warsaw Suburbs, where lease agreements amounted to 745,000 sqm. Interestingly, on the back of transactions by two e-commerce giants (Amazon and Zalando), which signed two leasing transactions for BTS projects totalling 291,000 sqm, the Szczecin region recorded a notable rise in tenant activity.

“Traditionally, companies classified as retailers and logistics operators have been the most active market players on the demand side. In 2016, they jointly accounted for 59 percent of total net take-up. The steady growth of the manufacturing and automotive sectors is also worth highlighting,” added Tomasz Olszewski.

Last year, the vacancy rate on the Polish industrial market stabilized at 6.1 percent. “It is worth pointing out that despite 1.2 million sq m of new space being delivered, the overall vacancy rate was not markedly affected, as a significant number of these projects were delivered in the BTS (build-to-suit) formula. Overall the industrial space available for lease currently stands at approx. 700,000 sqm,” explained Jan Jakub Zombirt, Associate Director, Research and Consulting at JLL.

Among the major regions, Warsaw saw a fall in available space of 63,400 sqm despite the large amount of completions (217,500 sqm) in 2016. The Warsaw Suburbs, with a vacancy rate of just 5.5 percent, enjoyed the best result in its history. On the other hand, Poznań’s vacancy rate increased to 7.2 percent.

According to data from warehousefinder.pl, the Tri-City registers vacancy rate of 14.1 percent, followed by Lublin (9.6 percent), Warsaw City (9.4 percent) and Kraków (9 percent). In Central Poland, the vacancy rate was just 3.0 percent.

Construction activity remained buoyant in 2016 as new warehouse and industrial stock increased by 1.2 million sqm and hit 11.2 million sqm by the end of the year. Developers were primarily focused on the markets of Upper Silesia (where 0.24 million sqm of new stock was delivered), the Warsaw Suburbs (0.21 million sqm), Central Poland (0.19 million sqm) and Poznań (0.18 million sqm). In 2016, Panattoni delivered the highest amount of new stock – 775,000 sqm.

“A total of approximately 1.45 million sqm of new warehouse space is currently under construction. This is comparable to the boom of 2006 and 2007. The increased activity among developers is a response to the growing demand for logistics and manufacturing space,” explained Jan Jakub Zombirt.

75 percent of under-construction stock is already secured by lease agreements. Nearly 300,000 sqm is being developed in two BTS projects in Gryfin near Szczecin – for Amazon and Zalando.

Despite improvements in road infrastructure, emerging locations are having difficulty in speeding up their development and attaining significant levels of stock. The majority of them are now seeing slowdowns after an initial period of growth (e.g. Lublin, Podkarpackie, the Tri-City and Kraków).

Industrial land – infrastructure is the key

In 2016 developers’ attention with regards to securing new locations for industrial projects was mainly focused on regions and cities which have benefitted (or will soon benefit) significantly from the completion of new infrastructure projects.

Agata Zając, Associate Director, Industrial, JLL, commented: “The completion of the A1 motorway (Stryków to Tuszyn) boosted demand for land in the eastern part of Łódź. The gradual extension of the S8 expressway in the south-western suburbs of Warsaw resulted in a strong construction pipeline of new projects, as well as increased demand for investment land. Other interesting locations are spread along the S3 expressway, which runs from Szczecin towards the border with the Czech Republic, creating investment opportunities in new or emerging submarkets such as Zielona Góra, Nowa Sól and Świebodzin. An increasingly important factor for new projects and demand for industrial land is workforce availability. The labour markets of some agglomerations, such as Poznań and Wrocław, are already challenging and reaching their limit for labour-intensive new investments. As a consequence, some smaller locations are beginning to attract the attention of investors.”

Investment transactions – at an all-time record high in 2016

“In 2016, the volume of industrial investment transactions amounted to approximately €770 million. This is the best result in the market’s history. The biggest transactions included a P3 platform purchase by GIC, the Hillwood portfolio acquired by CBRE GI, the NBGI portfolio purchase by Hines REIT, and GLL’s acquisition of Amazon Fulfillment Centre in Poznań. Interestingly, taking into account ongoing portfolio deals we can expect that 2017 will set another investment record in the industrial market,” commented Tomasz Puch, Head of Office and industrial Investment, JLL.

Ownership continues to be highly concentrated: at the end of 2016 the top five players (Prologis & JV partners, SEGRO & JV partners, Panattoni & JV partners, Blackstone/Logicor, and Goodman) together controlled 56 percent of the stock in Poland.

The record activity by both tenants and developers in 2016 allows for cautious optimism in 2017, provided the overall economic environment remains strong. Despite the significant new pipeline scheduled for delivery in H1 2017, the overall vacancy rate shouldn’t be negatively affected, as at the end of 2016 75% of new projects had already been secured by pre-lease agreements. Major regions are again expected to attract the lion’s share of market activity.

“One should note that the road construction programme will continue, with new expressway sections scheduled for delivery in 2017. Among others, the S3 expressway is expected to become an important transport corridor in Poland. As new sections of the S3 may be open in 2017/18, excellent investment opportunities will appear along Poland’s western border,” added Tomasz Olszewski.