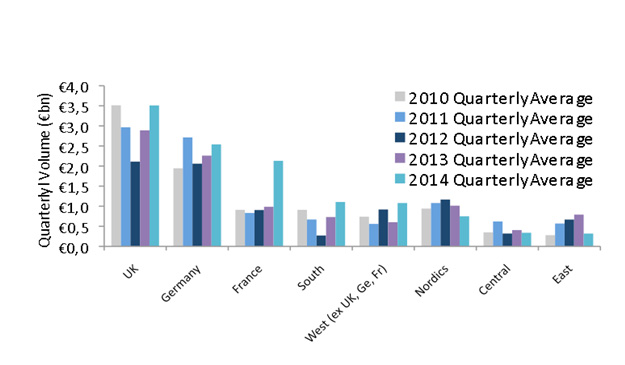 Retail: A rising star in the European market – EuropaProperty

Retail’s star continues to rise over the European real estate skyline, with volumes racing ahead in Q2 as a combination of improved product availability, greater macro-economic confidence and local evidence of at least stabilising retailer sales have helped to drive demand. What is more, activity is only likely to escalate in the second half of the year based on the volume of deals now under consideration or set to come to the market.

Volumes rose 39 percent in the second quarter compared to the first, easily beating a market wide increase of 20 percent. As a result, retail increased its market share and the quarterly total of €14.7 billion was the best Q2 result since 2007.

According to Mike Rodda, Head of EMEA Retail Capital Markets at Cushman & Wakefield, “Improved sentiment is obviously good to see but the actual availability of good quality product has been key to getting the market moving. To date it has been core countries pushing the market ahead but the biggest change in momentum has been in southern Europe and notably in Spain, which is certainly one of the hottest markets in Europe at the present moment, if not the hottest.”

The core of Germany, the UK and France drew a market share of 64 percent in the quarter compared to 66 percent in Q1. Southern markets increased their share to 10 percent from 7 percent in Q1 while the Nordics also saw their share rise, to 8 percent from 3 percent. By country, Denmark and Finland saw particularly notable increases but Sweden, Italy and Spain were also up very strongly and markets such as Portugal and Hungary are now seeing more interest.

The search for quality and stock and not just areas of immediate economic growth is highlighted by the fact that France was one of the biggest winners in Q2, despite its relatively weaker economic position, with long term players seizing on often hard to find opportunities in this sought after market.

A number of large deals and portfolios have been closed, raising France’s market volume back above pre-crisis levels. Retail volumes in Western Europe as a whole stand at 62 percent of the prior peak level but in France they are now 27 percent ahead of the previous high point.

In Q1 Germany was the most active retail market but in Q2, mega deals such as Bluewater and Merry Hill drove the UK back into the top spot while France moved into second place. According to Rodda, “The next few months will see more of the same, with interest in core markets continuing because they offer both good stock and better than average liquidity while the momentum in southern markets is only set to accelerate. However competition and higher pricing will push interest out to other markets and I don’t think the upturn in the Nordics in Q2 was a one off – this will deepen. What’s more, the best schemes in Central and Eastern Europe are also now looking more interesting as yields compress elsewhere and while uncertainty from the Ukraine is impacting, I see these markets moving ahead over the next year.”

Looking ahead, David Hutchings, Head of EMEA Investment Strategy at Cushman & Wakefield said “Our expectations for activity this year have edged up further, with a 21 percent increase to something like €50 billion now forecast. Improvements in finance availability and the low cost of debt are undoubtedly helping core markets like France, the UK, Sweden and of course Germany and this impact will continue to spread to new markets as competition to lend grows and banks and other lenders focus on building new loan books rather than just dealing with legacy issues, particularly as the ECB stress tests fall behind us.”

The audience for retail property continues to broaden and grow more international meanwhile, although particularly for larger assets, investors want experienced managers to be on board. At the same time, REITs are dominant in many areas, as shown by Land Securities victory in beating off domestic and international competition to buy Bluewater in the UK, as well as the growing influence of new REIT structures in Spain and Ireland.

According to Hutchings “The broadening base of demand will place further pressure on yields and more markets will see secondary yields in particular coming under pressure to fall. In those areas where rental growth expectations are well grounded, these falls will be sustained and will help to offset a reliance on yield gains and improved finance terms to drive performance- both of which will start to have run their course in the months ahead. However improvements in consumer sentiment are in general running ahead of actual turnover growth and rental pressures to date look to be selective and focussed on the best space. With a slower rental upturn likely for the mass market, investors and managers will need to be tuned into local retailing patterns to succeed.”

Łukasz Lorencki, a senior surveyor in the Capital Markets at Cushman & Wakefield, notes that similar to the whole EMEA region retail investment volume in Poland in the first half of 2014 rose by 49 percent compared with the same period last year, bringing the total volume to €369.5 million against €247.3 million in the first half of 2013. Key transactions included the sale of the Poznań City Center shopping centre to ECE and Resolution consortium and CBRE Global Investors’ acquisition of Galeria Mazovia in Płock. Maintaining high levels of investment activity in the second half of the year will mainly depend on the supply of large-scale quality retail assets, as strong demand for such properties is set to continue in the near future. This sector is very likely to witness a handful of major deals over the rest of the year which indicates that last year’s volume of €1.38 billion should be reached.