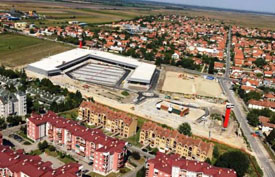 Shoppi retail park in Borča is an investment equal to €15 million and consists of 12,000 sqm. The project is being developed on a 4.4 hectare land plot. The future retail park will employ approximately 500 people.

MPC Properties opened in March this year its first Shoppi retail park in the Serbian town Subotica and has plans to continue to expand the retail park concept across the country.

MPC Properties is an experienced Serbian developer which has so far completed the development of UŠĆE Shopping Center and Immo Outlet Centar in Belgrade, as well as numerous other commercial and residential buildings in Serbia.