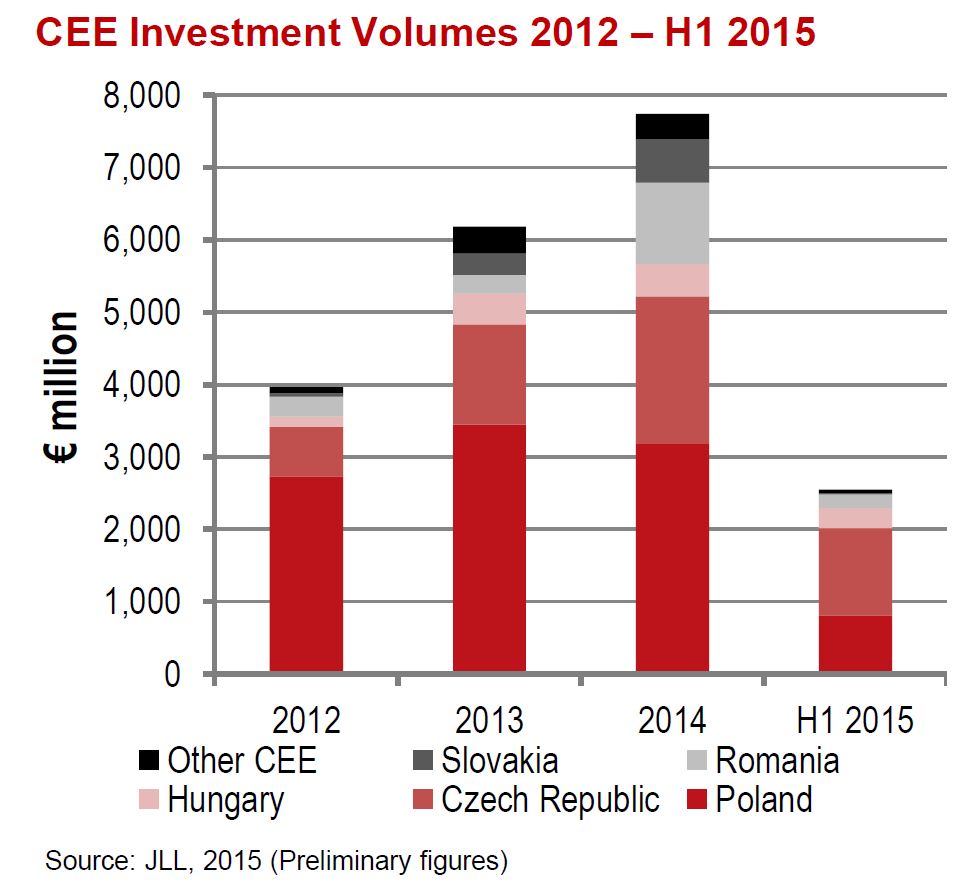 Slovak capital market – careful beginning of the year, outlook for the second half full of expectations – EuropaProperty

The improving economy and strong market confidence is being reflected in the real estate investment market in Slovakia. “Investor interest in Slovakia is currently focused on logistics and light industry segment, followed by offices and retail. Several larger transactions in almost all real estate segments are planned to be closed in H2,” said Miroslav Barnáš, Managing Director and Head of Capital Markets at JLL Slovakia.

The industrial market is currently the most active. In H1 2015, two smaller deals were successfully closed. There are three other industrial deals with scheduled closing during the summer and other should close by the end of 2015. Office investment volume is expected to increase in autumn. Retail is considerably behind the extremely strong last year as only one transaction in Bratislava was closed in H1 2015 – a pan-european portfolio deal in which Hron, a smaller sub-urban shopping centre in Bratislava was sold.

“Currently, the investment volumes are at low levels compared to the total expected volume, as the majority of deals will close in the second half of 2015. We do not expect the total yearly volume to exceed last year’s record of €610 million, however, the number of deals will be higher,” added Barnáš.

International players now play a dominant role in the investment market as they have significantly increased their appetite for portfolio products, even in smaller regional cities. The gap in pricing expectations between vendors and bidders has almost disappeared, as bidders are now willing to employ more resources than before. Slovakia in general has become an attractive investment destination, mainly due to the availability of financing, interesting portfolio offerings, favourable market conditions and attractive pricing when compared to other CEE capital markets.

“In alignment with the market situation in other parts of CEE, and as a result of improving market conditions, yields have already lowered and are expected to compress even further in Slovakia in Q3. Our view on prime yields as of Q2 stood at 7.00 percent for offices, 6.75 percent for shopping centres and 8.00 percent for industrial & logistics and retail warehousing,” explained Barnáš.

At almost €7.8 billion, 2014 represented the third highest CEE regional investment volume on record and the highest for many markets since the crisis. Investment volumes in the first half of 2015 reached approximately €2.55 billion, which is 12 percent lower than the corresponding period of 2014 (€2.9 billion).

The Czech Republic currently leads the region in terms of transactional volumes with a share of circa 47 percent in CEE, followed by Poland (32 percent), Hungary (11 percent), Romania (7.8 percent), Slovakia (0.5 percent) and the SEE (other CEE) markets (2 percent).