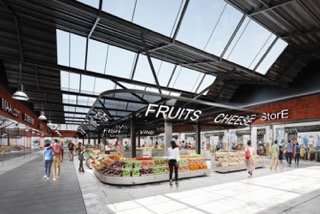 Tkalnia to change the centre of Pabianice – EuropaProperty

The historic centre of Pabianice is to receive a new commercial and entertainment centre. Tkalnia Centrum is the latest investment from A & A, which will bring a second-life to a degraded area of the city centre. Tkalnia will be built on the site of a former textile factory in Pabianice, the second most populated city in the Lodz area.

A & A is heralded as a leader on the real estate market in central Poland. It leases nearly quarter of a million sqm of retail, warehouse, production and office space, located in 18 renovated and revitalized buildings in Lodz and its surroundings.

Tkalnia will be in the immediate vicinity of other, already revitalized buildings. The location in the city centre, between the old and the new market, as well as in close proximity to green spaces will not only make the project the main point on the commercial map of the city, but also provide residents with entertainment and somewhere to spend a nice time.

“The investment will arise in streets with restaurants, cafes and shops surrounding the town square – with a fountain, market and greenery. We want Tkalnia to attract not only shoppers, but also people who want to eat well and have a good time,” commented Adrian Majsterek, investor and co-owner of A & A.

The leasable space of the building will be around 13,000 sqm. It will contain 40 shops. For the convenience of customers the investors are planning 230 parking spaces. They are currently in advanced negotiations with tenants interested in locating in the centre. The Blue Ocean Investment Group is responsible for the project’s commercialisation.