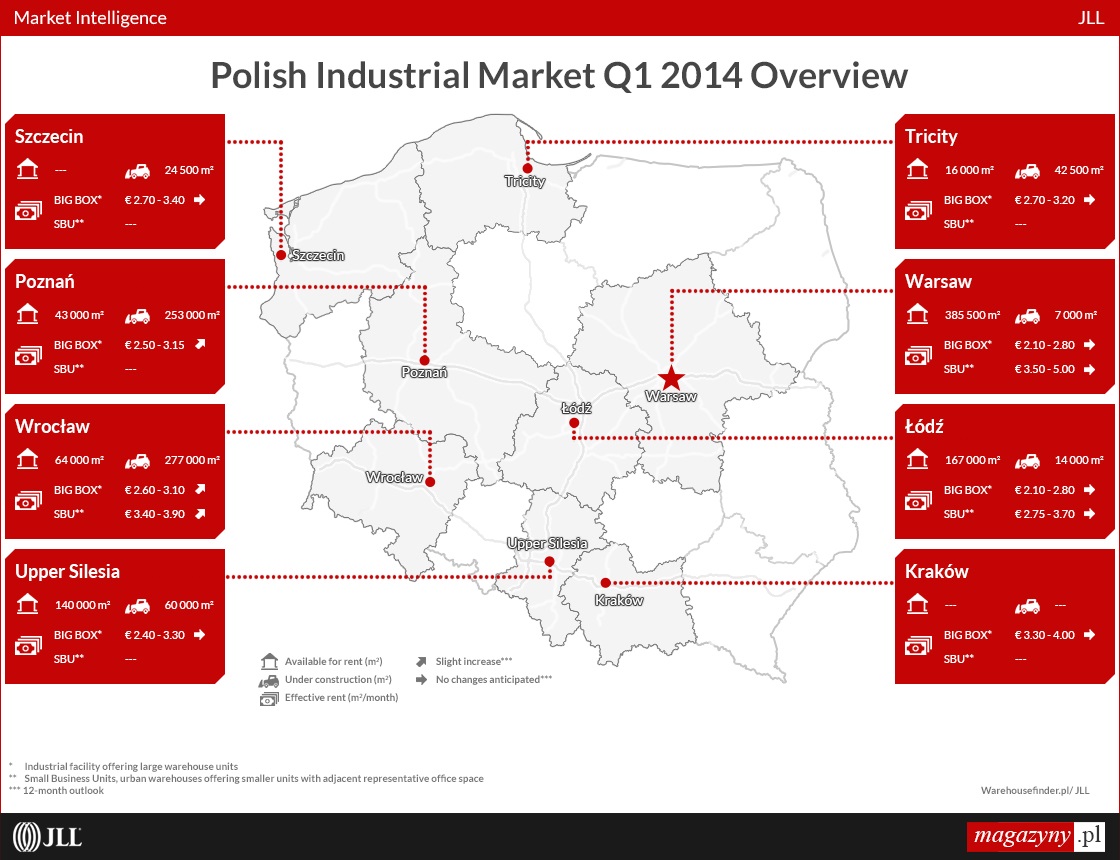 International advisory company JLL presents Q1 summary and the key trends for 2014 on the industrial market in Poland.

Tomasz Olszewski, Head of Industrial Department, CEE, JLL, said: “After the record-breaking 2013, when demand for industrial and warehouse space peaked, the market still seems to be keeping the momentum. In Q1, the gross take-up was in excess of 400,000 sqm, which marks the best beginning to a year since 2008. New lease agreements totalled 269,000 sqm, which translates into 67 percent of the gross demand. The remainder was attributable to lease renewals. Taking into account developers’ activity and the good shape of the economy, we see no reason to change our forecast, and that the net demand for industrial space will reach 1 million sqm in 2014.”

The strongest demand was recorded in Upper Silesia; a total of 126,000 sqm (31 percent share in the entire national take-up). Especially noteworthy is the high share of renewals in this region (71 percent) and the Warsaw Suburbs (49 percent), which demonstrates the maturity and attractiveness of these markets for tenants already operating there.

According to warehousefinder.pl, in terms of new demand, Poznań was ranked first with over 74,000 sqm leased. Szczecin is also an interesting case, with new demand in Q1 hitting 21,000 sqm.

The largest transactions in Q1 encompassed Carrefour (renewal of 46,000 sqm in Distribution Park Będzin) and Goodman’s 40,000 sqm lease contract, with tenant for whom the developer will construct a new facility near Konin. The average size of a unit leased stood at less than 6,000 sqm (8,000 sqm in 2013).

Once again the two most active sectors among all industrial tenants were logistics operators (43 percent share in new demand) and retail chains (29 percent).

At the end of Q1 2014, the entire supply of leasable industrial floor space stood at 7.73 million sqm. In terms of ownership structure, over half of the supply is in the hands of the four largest market players and their JV partners (Prologis – 2.01 million sqm, SEGRO – 0.97 million sqm, Blackstone – 0.56 million sqm and Panattoni – 0.52 million sqm). An increased interest from foreign investment trusts who look to buy prime assets across Poland has been registered.

At the beginning of April 2014, 678,000 sqm remained under construction across the country. 530,000 sq m of this space is in the regions of Wrocław and Poznań, which is largely due to deals signed by Amazon in 2013.

According to warehousefinder.pl, the share of speculative projects in the construction pipeline remains low (5.5 percent). However, the Wrocław market is now showing clear signs of a rebound in this respect. As of the end of Q1, 24,000 sqm were being constructed on a speculative basis in this region, and some additional developers expressed their interest in commencing such projects in the near future.

The vacancy rate stood at 10.9 percent at the end of Q1, and registered a decrease on Q4, when it totalled 11.3 percent. The largest share of immediately available space was found in the Warsaw Inner City – 20.5 percent (a drop of 1.8 p.p. on Q4) and Central Poland – 14.2 percent (a drop of 1 p.p.). The steepest reduction in vacancy rate was registered in the Wrocław region, where it dropped from 11.7 percent in Q4 to 7.9 percent in Q1.

In Q1 2014, most of the rents remained stable, with the exception of Szczecin. In the upcoming months, a stronger upward pressure on rents in Poznań and Wrocław is expected.