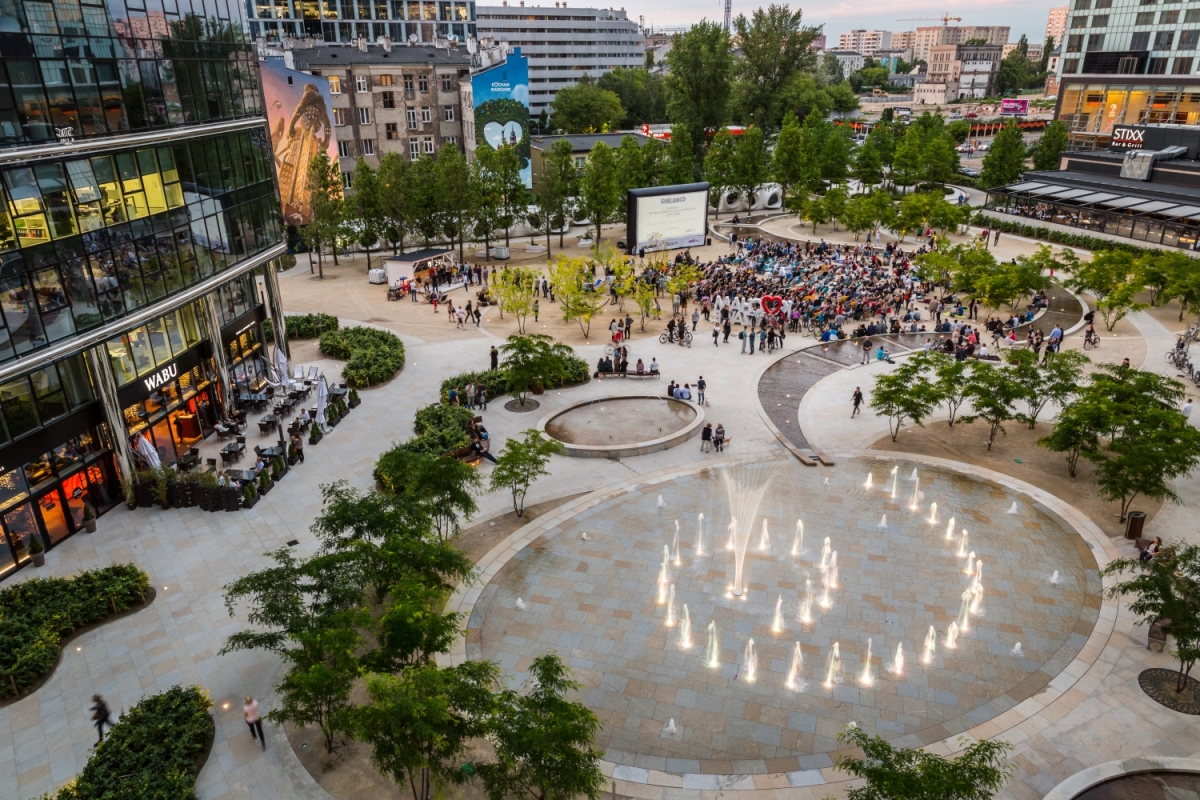 Plac Europejski teems with life all year round. Within its space, Ghelamco organizes a whole series of cultural, sports and entertainment events which attract thousands of people.

“Plac Europejski has grown to become Warsaw’s local center, which the social, cultural and business life of this part of the city is concentrated in. Contrary to skeptics’ concerns, the huge area in front of the Warsaw Spire business complex has not become a dead desert after hours, but a vibrant urban space, friendly both to the workers of the surrounding offices and to Warsaw residents,” says Jarosław Zagórski, Commercial and Business Development Director, Ghelamco Poland.

Every day Plac Europejski is visited by Varsovians, who spend their free time there. In the summer, you could see children playing in the fountains, local residents and workers from Warsaw Spire lying on deck-chairs, or parents walking with prams. The beauty of the place is appreciated by tourists, who take pictures in front of the “Kocham Warszawę” (I love Warsaw) sign, or newly-weds, who often choose to have their wedding photo shoots in front of Warsaw Spire.

A square full of attractions

In addition to modern architecture, fountains and lots of greenery, Plac Europejski attracts people with numerous events organized by Ghelamco and its partners. During the summer holidays, the square became the most popular outdoor cinema in Warsaw. From June 22 through the end of August, every Thursday you could see the best European movies from 11 countries. Every show attracted hundreds of people. A separate repertoire was prepared for the youngest ones. On Saturday mornings in July and August special cartoon shows were held for the children.

Plac Europejski was also home to competition and sports emotions. The biggest such event was Ghelamco Boules Cup 2017, held in the first Saturday of September. The space in front of Warsaw Spire turned into a huge boulodrome for pétanque, i.e. the famous French outdoor party game. It was one of the most important boules tournaments this season in the country, attended by licensed players from Poland, France, Ukraine, and Lithuania. Sports emotions for the whole summer were also ensured by live broadcasts of football games shown on a big screen by Eleven Sports.

Ghelamco also organized numerous events as part of selected holidays. On Earth Day, Varsovians sew plants and city plant pots, whereas on Children’s Day entire families took part in many games, activities and competitions with prizes. Another edition of the Night of Museums brought lots of cultural attractions, including the opening of the exhibition of works by Katarzyna Przezwańska, hosted by the artist herself. You could also get to know the secrets of Plac Europejski and Warsaw Spire during a tour with city guides.

In October Plac Europejski was filled with the atmosphere of Bavarian Oktoberfest. Every day for three weeks, in a huge tent at the foot of Warsaw Spire, you could have a beer, taste the delicacies of festive cuisine, and watch football games on a big screen. Varsovians felt genuine football emotions here during the live victories of the Polish national football team in the World Cup qualifiers, when the white and reds beat Armenia and Montenegro. The tent also featured a high-quality cinema with a series of Clint Eastwood movies.

Plac Europejski teems with life all year round, also when the temperature outside drops below zero. Last winter, every day Varsovians could use a free-of-charge ice rink, appreciate the neons exhibition in Art Walk, or come and take a walk in the Christmas atmosphere created by illumination of nearly 100 thousand lamps. In the middle of the square Ghelamco placed a new lighting installation with the famous Kocham Warszawę (I love Warsaw) sign, which has become one of the capital’s landmarks.

Many people visit Plac Europejski to appreciate art. Art Walk, i.e. the special exhibition gallery designed by architect Przemysław “Mac” Stopa, displays works of selected Polish artists. The exhibition is changed quarterly and is available at any time and all year round. The high quality of the displayed works is ensured by Fundacja Sztuka w Mieście (Art in the City Foundation), a foundation established by Ghelamco to engage in activities aimed at improving the quality of public urban space. The venue now features the “Warsaw Symbols” exhibition, dedicated to iconic graphical signs of institutions, companies and organizations connected with the capital. The exhibition is available until the end of November. In 2017 in Art Walk you could also see colorful neons as part of the “Neon Inn” exhibition, the “In the Deep” exhibition by American artist Chris Hernandez, or a selection of fossils and bones from the area of today’s Poland, prepared by Katarzyna Przezwańska.

Plac Europejski is the first public square in Warsaw of such scale, consistently designed and delivered by the developer on a private plot. In the previously neglected area of Towarowa, Grzybowska, Wronia and Łucka streets, a high-quality public space with greenery and fountains was created with only pedestrians in mind. The project was developed by Wirtz International Landscape Architects, a world-famous Belgian studio whose portfolio includes, among others, gardens of the Élysée Palace, Jardin du Carrousel in the Tuileries gardens in Paris, or Jubilee Park in London.

The 1.5 ha public space in front of the Warsaw Spire office complex was made available to Varsovians on the last Night of Museums, on May 14, 2016. The square quickly gained recognition not only of the city residents, but also spatial planning professionals, resulting in receiving an award of Polish Spatial Planners Society for the best newly created public space in Poland in 2016. Plac Europejski was also appreciated by the international community of property market experts, contributing to Warsaw Spire winning the title of the best office investment in the world in the prestigious MIPIM Awards 2017 competition in Cannes.

Now Plac Europejski has been nominated for the Architectural Award of the City of Warsaw President in the Best Public Space category. Warsaw residents can vote for it in an online poll until October 31.