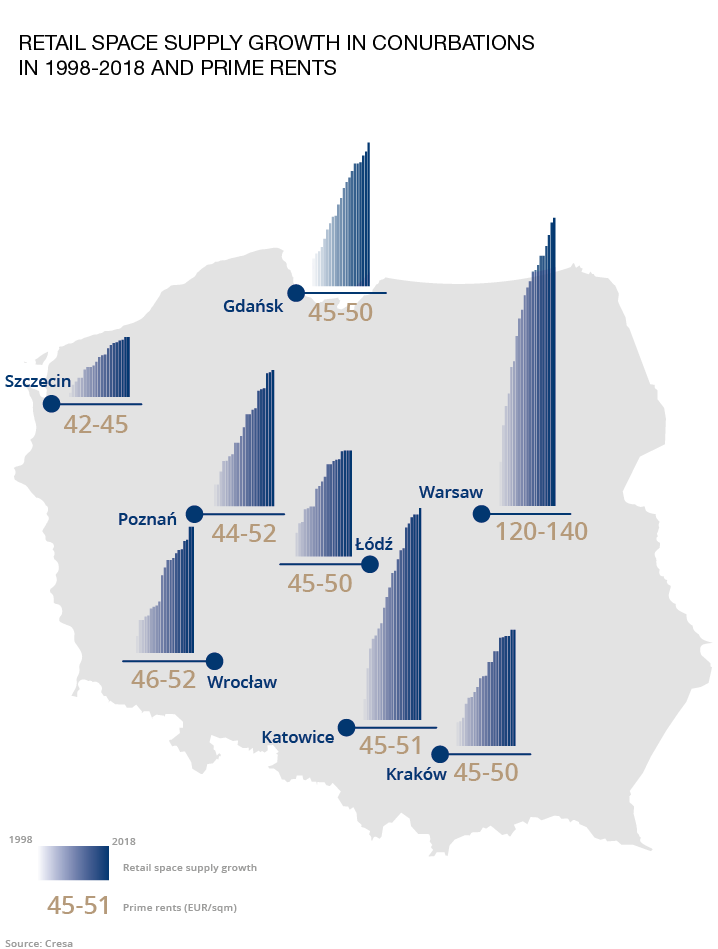 Conurbations are a very attractive market segment and continue to be a dominant part of the Polish retail market despite the rapid increase in retail schemes of various formats in smaller cities. Retail space concentrated in the largest cities accounts for 56 percent of Poland’s retail stock and this share will remain at 55 percent in the next two years given the retail development pipeline planned for 2020. However, conurbations differ from one another in terms of significance and characteristics.

Warsaw remains the largest market in terms of retail stock (standing at more than 2 million sqm, which accounts for 14 percent of Poland’s total stock) and shopping potential (more than 2.5 million people with the average purchasing power 70 percent higher than the national average). It has 45 shopping centres and 41 schemes of other formats, including mixed-use schemes such as the recently delivered retail space at CEDET, Centrum Marszałkowska and the Europejski Hotel. Galeria Północna shopping centre, which opened in September 2017, is the most recent significant addition to the market. A bigger shopping centre Galeria Młociny, which will provide 70,000 sqm of GLA, is expected to open in mid-2019. The Warsaw market will also see smaller format developments, both mixed-use schemes such as Koneser, Bohema, Port Praski, ArtN, and retail and entertainment schemes, largely in smaller towns of the Warsaw area such as Pruszków, Piaseczno and Konstancin-Jeziorna. Large retail projects in the pipeline include Atrium extensions (Targówek and Reduta) and Janki Shopping Centre, a shopping centre in the Wilanów district (now being redesigned under the working name Zielone Tarasy Wilanów), and another planned commercial complex Towarowa 22. The Warsaw retail market remains very attractive given its variety of retail formats, its low vacancy rate (far below the conurbation average, standing at approximately 4 percent), relatively low retail space saturation (3 percent lower compared to the conurbation average) and particularly low shopping centre space saturation (12 percent lower than the average), very high rents (prime rents at EUR 120-140 per sqm) and healthy demand for retail space coming from both retailers present on the market and newcomers.

The Silesian and Szczecin retail markets also have low saturation rates, approximately 10 percent and 20 percent below the average for the eight largest conurbations, respectively. The Silesian Conurbation, having a population of more than two million whose purchasing power is 20 percent higher than the national average, boasts 40 shopping centres and 35 other retail schemes totalling nearly 1.5 million sqm of GLA. Recent completions include Gemini Park Tychy, which opened in spring this year, while the development pipeline comprises Galeria Libero in southern Katowice, scheduled for opening in Q3 2018, and Silesia Outlet, a new outlet centre in Gliwice, to open in 2019. This year will also see completion of the extension of the Platan shopping centre in Zabrze and commencement of upgrading works at several existing schemes, following the recently completed upgrading and re-commercialisation of Silesia’s flagship shopping centre Silesia City Center. Szczecin, a much smaller conurbation with 560,000 inhabitants whose purchasing power is 15 percent higher than the national average, has 10 shopping centres and 12 other retail schemes. This market is dominated by extensions and upgrades of existing schemes such as last year’s completion of the extension of Galaxy, which became the largest shopping destination of Western Pomerania. The retail development pipeline includes the planned major extension of the Ster shopping centre and the mixed-use Hanza Tower, which will offer 17,000 sqm of retail and service space in the very heart of the city.

Krakow is also a very attractive retail market. It has a population of over one million people whose purchasing power is nearly 20 percent above the national average, and 31 retail schemes, including 15 shopping centres with a total floorspace of more than 560,000 sqm of GLA. The most recent completion is the Serenada shopping centre (opened in late 2017), which together with the planned remodelling of the first generation Krokus shopping centre nearby, will create a power centre in the northern part of the Krakow conurbation. Going forward, the Krakow market will grow largely through small convenience schemes and outlet centres, the latter comprising the recently begun remodelling of the Plaza Krakow shopping centre into Fashion Outlet Krakow, and Cracovia Outlet (planned for 2020). Upgrades are also underway in the city’s largest shopping centres, including Bonarka City Center.

The Łódź conurbation is inhabited by nearly one million people and offers 540,000 sqm of GLA at 14 shopping centres and another 150,000 sqm at 15 other retail schemes. Its retail space saturation rates are close to the conurbation average while vacancy rates are only slightly above the average. Despite this, there is no space for large scale retail projects and the Łódź market is expanding mainly through small convenience schemes such as Vendo retail parks, mixed-use projects such as Monopolis and retail schemes in smaller cities such as the Tkalnia project, which recently broke ground in Pabianice.

Tricity, which also has a population size of one million people whose purchasing power is approximately 16 percent higher than the national average, boasts 25 shopping centres, inclusive of the latest completions such as Forum Gdańsk opened in May 2018, which provide a total of nearly 700,000 sqm of GLA, and 18 other retail schemes. Tricity’s total retail stock now amounts to nearly one million sqm. These figures directly translate into high saturation rates of 17% and 10% higher than the conurbation retail space saturation rates and shopping centre saturation rates, respectively. This is the reason why there are no plans for large scale retail projects on this market. Tricity’s retail development pipeline includes only the extension of Morski Park Handlowy underway in the southern part of Gdańsk, and planned projects: Pomerania Outlet in Rumia and extension of Galeria Bałtycka in Gdańsk.

Of the eight largest cities, Wrocław and Poznań have the highest retail space and shopping centre space saturation rates being 45 percent and 35 percent higher than the conurbation average, respectively. Both cities have approximately 800,000 inhabitants whose purchasing power is approximately 35 percent above the national average. Following the recent openings of large shopping centres, i.e. Wroclavia in late 2017 and Posnania in 2016, which in addition to a considerable addition of retail space to their respective markets also brought the latest quality and new retail space standards, Wrocław and Poznań are searching for a new market equilibrium through repositioning of existing shopping centres. Wrocław, which already has 17 shopping centres providing a total of nearly 700,000 sqm of GLA and 13 other retail schemes offering approximately 180,000 sqm of GLA, is not expected to see any new retail-only projects break ground. Some new retail and service space will be delivered in the near future through mixed-use schemes such as Bulwary Książęce. Similarly, there are no retail schemes in the pipeline in Poznań, which offers 660,000 sqm of floorspace at 21 shopping centres and another 220,000 sqm at 15 other retail schemes.